The 6th WPMC2003 was held in October 21-22 in Yokosuka, Japan.
Official WEB site of WPMC2003 has already been closed.
The following information is cited from YRP News (No.29 Autumn 2003) (In Japanese) 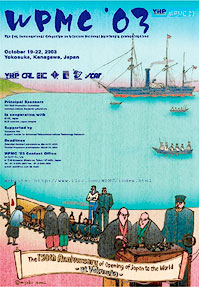 The year of 2003 is the 150th anniversary that “Black Ships” (Warships), led by Commodore Matthew C. Perry , had  come to Uraga Bay, Yokosuka Japan in 1853 with a mission of opening  Japan to the world.

Total number of 431 attendees (181 from outside Japan) joined the WPMC2003.
There were 428 paper submissions for the conference, 332 of which were accepted, and presented in the technical sessions. Six of them were awarded as the outstanding papers in the
banquet on the evening of 21 (List on P.3).

Yokosuka hosted WPMC’03 as a commemorative event to mark the 150th anniversary of U.S. Naval Commodore Perry’s landing on Yokosuka, a historical milestone for Japan to open her door to the world. Apart from symposium participants, a hundred of Yokosuka residents were invited to the opening ceremony. Mr. Sawada, Mayor of Yokosuka hosted a reception for the participants. In the award banquet, there was a demonstration of a Morse telegraph by Denkitsushin Shinkoukai, and Communications Museum, and Communications Research Laboratory.

Finally, Mr. Pei, Deputy Mayor of Hangzhou, China presented the site of WPMC’04 Extra Event in March 2004, on behalf of the host. Prof. Pupolin, University of Padova, Italy, representing the local organizer, also introduced the venue of the next WPMC in September 2004.