Organization and Operation of WPMC

Patrons (Principal financial sponsors)
The WPMC shall be financially supported and organized  jointly by the following three organizations.

The National Institute of Information and Communications Technology
(hereinafter called as NICT)
https://www.nict.go.jp/en/index.html

WPMC Bylaw
The operation of WPMC is managed by the WPMC Steering Board and the Organizing Committee (Local committee), and their actions are subject to the WPMC Bylaw.

Inauguration
The WPMC was inaugurated in 1998 in Yokosuka, Japan, as a global platform which for enabling global collaboration in the field of information and communications technologies (ICT), especially wireless information.

Since the first WPMC1998 in Yokosuka, WPMCs have been held in all over the world, Asia, Europe and America. WPMC has grown up to established itself as a unique global conference dedicated to wireless multimedia convergence.

In 1993, Ministry of Posts and Telecommunication (MPT, present Ministry of Internal Affairs), Japan acted the regulation of radio usage fee, which is the system to collect the fee from radio broadcast stations, mobile cellular operators and users who are using radio frequency bands.

According to the Government R&D policy, Communications Research Laboratory of MPT (present National Institute of Information and Communications Technology; NICT) opened a Wireless Communication Research Center in YRP in 1998. CRL started R&D programs based on new policies of collaborative R&D projects with industries, academia and the government in global wide levels.

Under these circumstances, the WPMC was founded by Professor Hideki Imai, Professor Ramjee PRASAD and Dr. Shingo OHMORI who was the first Director of Wireless Research Center in NICT Yokosuka.

The first WPMC1998 was held in YRP Hall of YRP No.1 Building, and the first Banquet was held at the Yokosuka Prince Hotel.

Growing
Since the inauguration in 1998, WPMC has been held in Asia, Europe and America, and WPMC has established itself as a unique global conference dedicated to wireless multimedia convergence. In the last half-decade, some of WPMC has been jointly held with the Global Wireless Summit (GWS)-the world’s largest annual international conference on wireless techno-business modelling.

For converging Wireless Technology and Business
Continuing the series, the 22nd WPMC2019 has merged with Global Wireless Summit (GWS) and its related topics to bring together academia and industries to explore future challenges towards ICT globalization in existing and future wireless technologies as well as help businesses in strengthening their business models and business model innovation.

The first WPMC was held at YRP Hall in November 1998. The operation was done by staffs of CRL Yokosuka Research Center (present NICT Yokosuka). 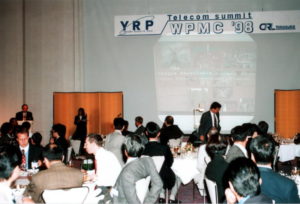 The Banquet of WPMC1998 was held at Yokosuka Prince Hotel.