The 7th WPMC2004 was held in September 12-15 in Abano Terme, Italy.
Original official WEB site of WPMC2004 has already been closed.
The following information is cited from YRP NEWS (Early Spring 2005 No.33) 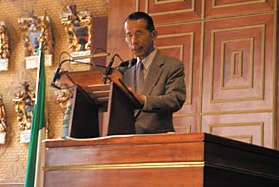 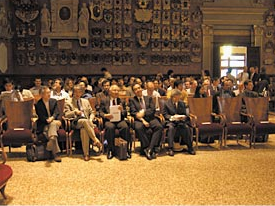 The 7th Wireless Personal Multimedia Communication Symposium (WPMC 2004) was held from September 12-15, 2004, in Abano Terme, Padova, Italy. WPMC2004 had been hosted by NICT, YRP, the University of Padova, University of Rome, Veneto, Italy, and other sponsors of Padova.

The symposium consisted of 55 technical sessions, with a total of 320 research presentations consisting of 211 oral presentations and 109 poster sessions. With 414 papers submitted, the adoption rate of 78% can be considered as evidence that WPMC has grown up as an international conference. In terms of the number of papers published by region, 108 in the Asia-Pacific region, 202 in Europe, 11 in North America, 1 in South America, and a large number of participants from Europe are characteristic of this symposium. The participants by country were 120 in Japan, 59 in Italy, 27 in Denmark, 22 in England, 20 in Germany, 15 in France and others.

On the 12th of the first day, there were three tutorial sessions and a reception. The opening ceremony on the 13th was held at the Galileo Galilei Great Hall of Padova University, which is about 30 minutes away by bus from the venue. This is the hall where Galileo, who was a professor of mathematics at Padova University from 1592 to 1610, gave lectures.

At the opening ceremony, the symposium organizer’s greetings by the chairman of Nagao (President of NICT), and Mr. Tatsuo Kito, Director-General for Technology Policy Coor dination, Minister’s Secretariat, Japan Ministry of Internal Affairs and Communications (MIC), gave a lecture entitled “u-Japan; New Endeavor of Japan” on the outline of the u-Japan plan that shows the future direction of information and communication of Japan. . WPMC’04 drew approximately 400 research scientists from around the world.

Another important feature of WPMC is to commend outstanding research papers. On the night of the 14th, an award banquet was held at Ristorante Relais Golf Montecchia, which received three excellent awards and two excellent student awards. At the banquet, Consort Veneto, who is world-renowned for playing medieval music, used medieval musical instruments, singing and poetry readings, and played works based on Petrarch’s poems, as well as more than a dozen songs to enrich the atmosphere of the venue .